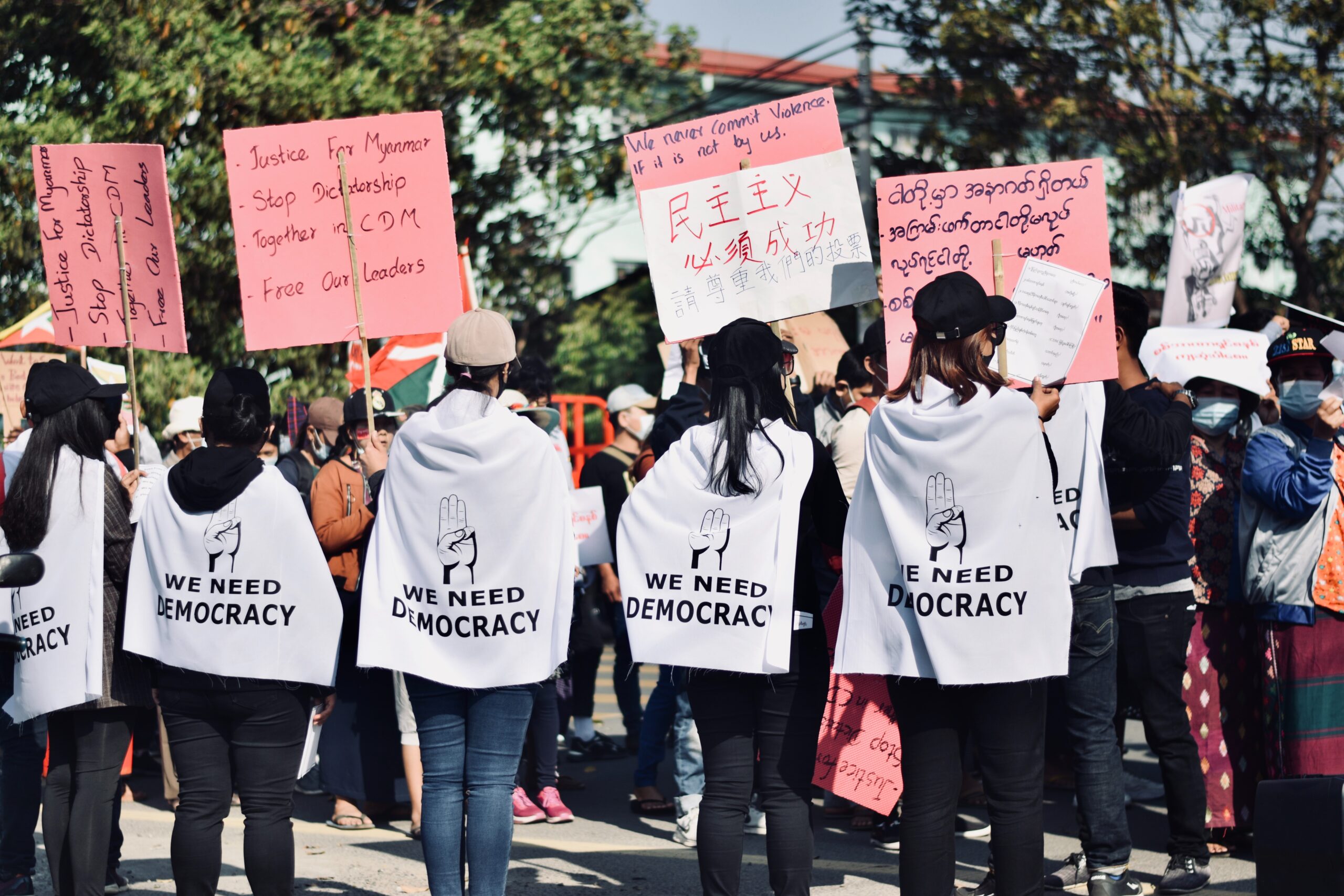 The executions of four democracy activists in Myanmar by the military is believed to be the first use of capital punishment in decades. This news has drawn international condemnation, as the shadow National Unity Government of Myanmar (NUG) formed in opposition to the February 2021 military coup, condemns the killings. The NUG states that they are “extremely shocked and saddened” by the reports of the executions. The four victims were accused of committing “terror acts”. They are former lawmaker Phyo Zeya Thaw, writer and activist Ko Jimmy, Hla Myo Aung and Aung Thura Zaw. This tragic event comes in the wake of the military coup which took place last year and overthrow of the democratically elected government led by Aung San Suu Kyi’s National League for Democracy (NLD). These executions serve as a stark reminder of the power Grabbing brutal junta currently ruling Myanmar. We must continue to stand with the people of Myanmar in their fight for democracy and justice.

The execution of four men in Myanmar this week has drawn condemnation from human rights groups. The men – who were pro-democracy figures, representatives of armed ethnic groups and members of the National League for Democracy (NLD) – were charged under the country’s counter terrorism laws and executed by hanging. This is the first time executions have been carried out in Myanmar since 1988, and human rights groups are urging the international community to “punish (the) murderous military junta for their cruelty and killings”. The state news outlet – Global News Light of Myanmar – said the four men were executed as they “gave directives, made arrangements and committed conspiracies for brutal and inhumane terror acts”. Amnesty International has called on Myanmar to end the use of the death penalty immediately, saying that it is a “cruel, inhuman and degrading punishment” that violates international law. With these latest executions, Myanmar has once again shown its blatant disregard for human life and basic human rights.

Four men in Myanmar were executed on Friday despite calls for clemency from human rights groups. The men were handed the death sentence in January following closed-door trials that human rights groups have criticised as being unjust and non-transparent. Phyo Zeya Tha and Kyaw Min Yu, also known as Ko Jimmy, lost their appeals against their sentences in June. Family members of the four men are waiting at Yangon’s Insein Prison to question authorities, according to BBC Burmese. They were yet to receive the bodies, Ko Jimmy’s sister told the BBC. Phyo’s wife, Thazin Nyunt Aung, said she had not been informed of her husband’s execution, Reuters reported. The families have all submitted applications for information on the executions.

Ko Jimmy and Phyo Zeya Thaw are two prominent Burmese pro-democracy activists who have been recently arrested and charged with terrorism offenses. Ko Jimmy is a veteran of the 88 Generation Students Group, which was a key player in the 1988 student uprisings against the country’s military junta. He served multiple stints in prison for his involvement in the pro-democracy movement, before being released in 2012. Phyo Zeya Thaw is a former NLD lawmaker and a close ally of Suu Kyi. A former hip-hop artist, he often drew the ire of the junta for his anti-military lyrics. He was arrested in November for alleged anti-terror offences. Both men have plead not guilty to the charges against them and maintain that they are being persecuted for their political beliefs. Their arrests have been widely condemned by international human rights organizations as an attempt by the Burmese government to silence dissent and stifle the pro-democracy movement.

Since the military coup in Myanmar last year, there has been a significant crackdown on opposition activists and those deemed to be harbouring anti-coup sentiments. Recently, four activists – Hla Myo Aung, Aung Thura Zaw, Kochaar and Nyan Linn Aung – were sentenced to death for killing a woman who was allegedly an informer for the junta. United Nations Secretary-General Antonio Guterres has called the military’s decision to sentence the four activists to death “a blatant violation of the right to life, liberty and security of person”. Less is known about Hla Myo Aung and Aung Thura Zaw, but their sentencing highlights the increasing repression of dissenting voices in Myanmar. Kochaar and Nyan Linn Aung, on the other hand, are relatively well-known members of the pro-democracy movement in Myanmar. They have been vocal in their opposition to the military coup and their sentencing is seen as a further attempt to silence dissent. The international community must continue to pressure the Myanmar military to respect human rights and end their repressive campaign against those who oppose them.

On February 1, Myanmar’s military seized power from the elected government, with Senior General Min Aung Hlaing claiming he was taking charge due to “election fraud”. They claimed the results of a general election that saw Suu Kyi’s political party winning by a landslide were rigged – an accusation election commission officials denied, saying there was no evidence of fraud. Since the coup, Suu Kyi has been detained under house arrest, and slapped with a litany of charges ranging from corruption to violating the country’s official secrets act, which could see her serving a sentence of up to 150 years. The Assistance Association for Political Prisoners (AAPP), which keeps a toll of those killed, jailed or detained by the military, says that 14,847 people have been arrested since the coup, with an estimated 2114 having been killed by military forces. The military has also imposed a curfew and cut off internet access in an effort to quell protests. In response to the coup, protesters have taken to the streets in mass demonstrations calling for the restoration of democracy. These protests have seen a heavy crackdown by security forces, with hundreds of people killed and thousands more detained. The United Nations has condemned the violence against protesters and called for the release